1-855-712-6692
Home»Service Area»Services in Moncton, NB
Contact Us For
A Free Estimate!
Reviews From Moncton
See All Reviews
Products & Services

Hello Corey.  I just sent an email this morning, but I sent it to the info address, so I'll repeat...
Testimonial from Marc & Julie from Moncton, NB
Happy Customers Surrounding Moncton, NB
Testimonials
Reviews
Work Requests

Click the icons to see what our customers had to say.

Here at Ridgeback Basement Systems, we believe in the value of customer service and are proud to serve our area. We use only high quality products, installed by our excellent team of trusted technicians so that you can be sure of long-lasting results. We want to work with you to find the solution that will work best for you! 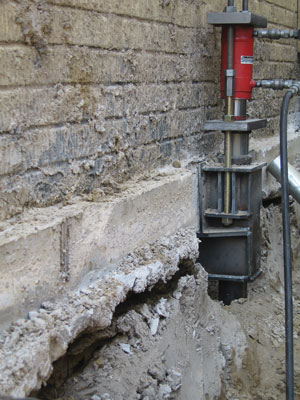 Having troubles with sinking, sloping floors or cracked walls that lean in too much? Then you might have a foundation problem. These kinds of problems may seem enormous, but they often are caused simply from weakened, broken soil that can no longer support the weight of the structure. We can provide expert repairs with proven, patented products to ensure quality, long-lasting results.

Do you have troubles with water damage in your basement? Then you need the waterproofing professionals at Ridgeback Basement Systems to help you find a solution will fit your home's needs. We can fix any water proofing problem and give you great results that will leave your basement clean, dry, and energy-efficient. Our waterproof walls and floors will seal out moisture and humidity while keeping good air in, making your basement a more comfortable space!

Signs of a waterproofing problem

When you need a sump pump that you can depend on, no matter the weather, trust the TripleSafe sump pump. With a primary and secondary pump, as well as a third, battery operated back up pump, you can always be sure that your basement is safe and dry.

Although crawl spaces can be a more neglected area of the home, problems that occur in a crawl space can have disastrous effects on the house's foundations. If your crawl space is falling into disrepair, then it is important to get it inspected and repaired by specialists with experience in their field. Our crawl space encapsulation system utilizes thermal insulation, vapor barriers and so much more to turn your dirty, unsafe crawl space into a clean, healthy, energy-efficient area! Not sure if you have a crawl space problem? Here are some of the major indicators:

Ridgeback Basement Systems is proud to serve our area because we make customer service our top priority. Let our team of basement and foundation specialists work to find a solution that will work best for your home and your budget. Call us today for a free estimate!

Get a Free Estimate!

In need of a window well.
Project Location: Moncton, NB

Have an extension that I want to find out costs on what it would take to winterize with a strong vapor barrier etc. Looking for ways to deter rodents from going under and keep as much heat as possible. etc.
Project Location: Moncton, NB

This is my rental property, last night water got in im guessing from the floor in 2 or 3 areas of the basement. As its finished with a basement appartment i dont know the source. The water didnt fill the basementnit stayed in specific areas. I need to have an estimate to find the source and repair. Its an older home thus drain tile could be issue.
Project Location: Moncton, NB

My minihome needs to be relevelled. Also the main beam that runs the length of the minihome is rotting and needs replacing. Can u help me out? Minihome is 16' x 55'.
Project Location: Moncton, NB

I am completely renovating my basement and looking for a good material for the floor. I am interested in insulated floor panel. Do you have any product that might give comfort for a living room?
Project Location: Moncton, NB

I am a the buyer Realtor for this property. We got permission from owner to have a professional get a quote for the basement beams. I would gladly email you the Inspection report so that you can see exactly what we are dealing with.
Project Location: Moncton, NB

Hi I'm interested in the SaniDry dehumidifier systems. I am wondering if you could provide a quote via email for a typical install. We previously had a floor drain system installed by Ridgeback in our cold room which drains into our sump pit. I am also wondering if you have ever fabricated a drain pit cover. Our current pit is large and a non standard size. Thanks
Project Location: Moncton, NB

We have water leak in our basement.
Project Location: Moncton, NB

I would like a quote for basement repairs. Also, i need new basement windows (concrete cut) as mine are not egress.
Project Location: Moncton, NB

Wanting to add a egress window to a basement bedroom. There is currently to window in the room.
Project Location: Moncton, NB

There are cracks in the basement and moisture. I'd like to know if that could affect the structure of the house and also get a quote to repair them Thanks!
Project Location: Moncton, NB

I have water infiltration in my basement. I need estimate for reparation.
Project Location: Moncton, NB

We've been in our house for almost 10 years. There has been cement board around the house foundation since we've been here, we can now see that it is separating from the foundation and it looks as though the concrete behind it is crumbling. We also have developed cracks in the front stairs. Not sure if this is related.
Project Location: Moncton, NB

Hi I have a 20 x24 attached garage....the floor has sunken and cracked in various parts from not being compacted properly when installed ....would you be so kind as to give me an estimate to repair. Thank you and have a great day !
Project Location: Moncton, NB

My garage slab as a lot of big cracks.I like do get a quote
Project Location: Moncton, NB

I have a small leak coming in my basement, it started early this spring, first time in 27 years, I would like your opinion on a possible fix.
Project Location: Moncton, NB

I am having some major foundation issues and need some recommendations/quotes. We have a major crack the full length of one wall and various cracks around other parts of the foundation. It also looks like the drain tile/draining system was attempted to be repaired, but was done poorly. The foundation is a block foundation. I'm looking to get quoted for repair and if beyond repair a new foundation.
Project Location: Moncton, NB

Hi I have some water getting into my basement due to some cracks in a block foundation. I'm wondering what can be done for that. Thanks.
Project Location: Moncton, NB